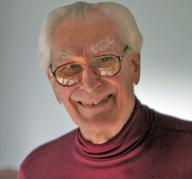 Richard Kenneth Guy (30 September 1916 – 9 March 2020) was a British mathematician. He was a professor in the Department of Mathematics at the University of Calgary. He is known for his work in number theory, geometry, recreational mathematics, combinatorics, and graph theory. He is best known for co-authorship (with John Conway and Elwyn Berlekamp) of Winning Ways for your Mathematical Plays and authorship of Unsolved Problems in Number Theory. He published more than 300 scholarly articles. Guy proposed the partially tongue-in-cheek "strong law of small numbers", which says there are not enough small integers available for the many tasks assigned to them – thus explaining many coincidences and patterns found among numerous cultures. For this paper he received the MAA Lester R. Ford Award. Source: Wikipedia (en)