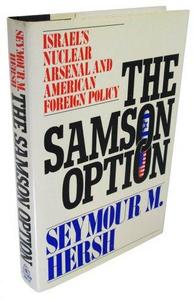 The Samson Option: Israel's Nuclear Arsenal and American Foreign Policy is a 1991 book by Seymour Hersh. It details the history of Israel's nuclear weapons program and its effects on Israel-American relations. The "Samson Option" of the book's title refers to the nuclear strategy whereby Israel would launch a massive nuclear retaliatory strike if the state itself was being overrun, just as the Biblical figure Samson is said to have pushed apart the pillars of a Philistine temple, bringing down the roof and killing himself and thousands of Philistines who had gathered to see him humiliated. According to The New York Times, Hersh relied on Ari Ben-Menashe, a former Israeli government employee who says he worked for Israeli intelligence, for much of his information on the state of the Israeli nuclear program. However, Hersh confirmed all of this information with at least one other source. Hersh did not travel to Israel to conduct interviews for the book, believing that he might have been subject to the Israeli Military Censor. Nevertheless, he did interview Israelis in the United States and Europe during his three years of research.
Read more or edit on Wikipedia