Eduardo Humberto del Río García (June 20, 1934 – August 8, 2017), better known by his pen name Rius, was a Mexican intellectual, political cartoonist and writer born in Zamora, Michoacán. One of the most popular Mexican cartoonists, Rius has written over a hundred books that remain widely popular, especially amongst his Mexican readers. Rius was a fierce political activist, and his progressive and left-wing point of view is often present in his writings, accompanied by a strong criticism about neoliberal Mexican doctrines, US Government policies, and the Catholic Church. He used to be an open advocate of the Cuban revolution as in Cuba for Beginners and a strong Soviet bloc sympathizer until the end of the Cold War. In the 1960s he began cartooning in magazines and newspapers, sometimes regarding political themes. He made two famous comics, Los Supermachos and Los agachados, which were a humorous criticism of the Mexican government. After his successes with these, he made many books, all illustrated and written by hand by him and covering a range of topics on politics, vegetarianism, and religion. His books have become popular mainly because of their humour, which attempts to reach the general reader, as well as for their simplicity and intellectual acuteness. They give an overview of their theme without becoming difficult. In 1970, the first English edition of Rius's book Cuba para principiantes, a humorous comic strip presentation of Cuban history and revolution, was published in the United States as Cuba for Beginners. The book made no particularly great impact, but the 1976 English language publication of Marx for Beginners, a translation of his Marx para principiantes (1972), a comic strip representation of the life and ideas of Karl Marx, became an international bestseller and kicked off the For Beginners series of books from Writers and Readers and later Icon Books.In the 1990s, he participated in two political humour magazines: El Chahuistle and El Chamuco (named after an insect plague and the devil, respectively, because they were harsh on politicians and religious leaders). His success and long career have made him a reference point to the newer generations of political cartoonists in México. Mexican director Alfonso Arau made Calzonzin Inspector, a live action film based on characters appearing in Los Supermachos that was released in 1974. He died on August 8, 2017 at the age of 83.
Read more or edit on Wikipedia 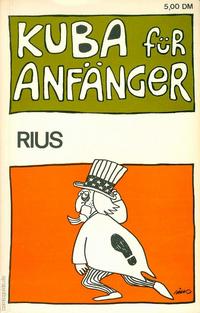