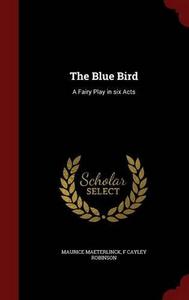 The Blue Bird (French: L'Oiseau bleu) is a 1908 play by Belgian playwright and poet Maurice Maeterlinck. It premiered on 30 September 1908 at Konstantin Stanislavski's Moscow Art Theatre, and was presented on Broadway in 1910. The play has been adapted for several films and a TV series. The French composer Albert Wolff wrote an opera (first performed at the New York Metropolitan Opera in 1919) based on Maeterlinck's original play, and Maeterlinck's innamorata Georgette Leblanc produced a novelization. The story is about a girl called Mytyl and her brother Tyltyl seeking happiness, represented by The Blue Bird of Happiness, aided by the good fairy Bérylune. Maeterlinck also wrote a relatively little known sequel to The Blue Bird titled The Betrothal; or, The Blue Bird Chooses.
Read more or edit on Wikipedia