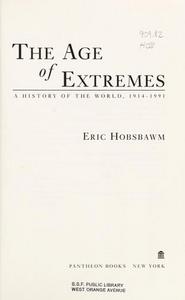 The Age of Extremes

The Age of Extremes: The Short Twentieth Century, 1914–1991 is a book by Eric Hobsbawm, published in 1994. In it, Hobsbawm comments on what he sees as the disastrous failures of state socialism, capitalism, and nationalism; he offers an equally skeptical take on the progress of the arts and changes in society in the latter half of the twentieth century. Hobsbawm calls the period from the start of World War I to the fall of the so-called Soviet bloc "the short twentieth century", to follow on "the long 19th century", the period from the start of the French Revolution in 1789 to the start of World War I in 1914, which he covered in an earlier trilogy of histories (The Age of Revolution: Europe, 1789-1848, The Age of Capital: 1848–1875, The Age of Empire: 1875–1914). In the United States, the book was published with the subtitle A History of the World, 1914–1991 (ISBN 978-0-679-73005-7). The book made the British best seller list and was translated in thirty languages.
Read more or edit on Wikipedia