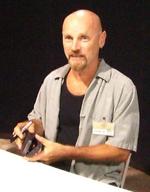 James P. Starlin (born October 9, 1949) is an American comics artist and writer. Beginning his career in the early 1970s, he is best known for space opera stories, for revamping the Marvel Comics characters Captain Marvel and Adam Warlock, and for creating or co-creating the Marvel characters Thanos, Drax the Destroyer, Gamora, and Shang-Chi. Later, for DC Comics, he drew many of their iconic characters, including Darkseid and other characters from Jack Kirby's Fourth World, and scripted the death of Jason Todd, the second Robin, during his run on Batman. For Epic Illustrated, he created his own character, Dreadstar. Source: Wikipedia (en)