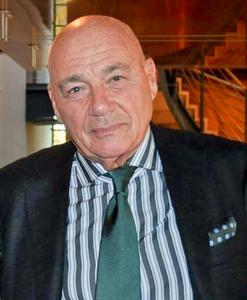 Vladimir Vladimirovich Pozner (Russian: Влади́мир Влади́мирович По́знер; born 1 April 1934) is a French-born Russian-American journalist and presenter.He is best known in the West for his television appearances representing and explaining the views of the Soviet Union during the Cold War. He was memorable as a spokesman for the Soviets in part because he grew up in the United States and speaks fluent English, Russian and French. Pozner later described his role as propaganda.After the Cold War, Pozner moved to the United States to work with Phil Donahue, before returning to Moscow to continue working as a television journalist. Since 2008, he has hosted the eponymous show Pozner on Russia's Channel One where he interviews public figures.
Read more or edit on Wikipedia