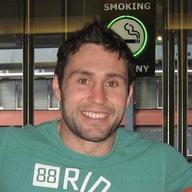 Stephen Michael Jones (born 8 December 1977) is a Welsh rugby union coach and former player who played primarily at fly-half. He played more than 100 times for Wales and six times for the British & Irish Lions. Jones was the record cap holder for Wales until he was overtaken by Gethin Jenkins on 15 March 2014. He remains as Wales most-capped back. With 970 international points, Jones is eighth in the List of leading rugby union test point scorers, and the second-highest Wales player on the list behind Neil Jenkins. At the end of the 2012–13 season, Jones retired from playing professional rugby to take up a coaching position at London Wasps and in August 2015 he joined the Scarlets as backs coach. Source: Wikipedia (en)