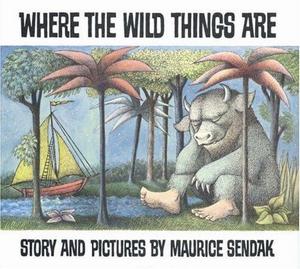 Where the Wild Things Are

Where the Wild Things Are is a 1963 children's picture book by American writer and illustrator Maurice Sendak, originally published by HarperCollins. The book has been adapted into other media several times, including an animated short in 1973 (with an updated version in 1988); a 1980 opera; and a live-action 2009 feature-film adaptation, directed by Spike Jonze. The book had sold over 19 million copies worldwide as of 2009, with 10 million of those being in the United States.Sendak won the annual Caldecott Medal from the children's librarians in 1964, recognizing Wild Things as the previous year's "most distinguished American picture book for children". It was voted the number one picture book in a 2012 survey of School Library Journal readers, not for the first time.
Read more or edit on Wikipedia