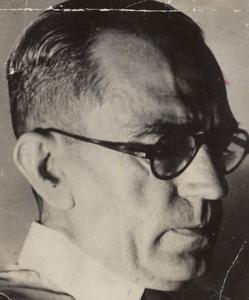 Graciliano Ramos de Oliveira (Portuguese pronunciation: [gɾasili'ɐ̃nu 'ʁɐ̃mus dʒi oli'vejɾɐ]) (October 27, 1892 – March 20, 1953) was a Brazilian modernist writer, politician and journalist. He is known worldwide for his portrayal of the precarious situation of the poor inhabitants of the Brazilian sertão in his novel Vidas secas. His characters are complex, nuanced, and tend to have pessimistic world views, from which Ramos deals with topics such as the lust for power (the main theme in São Bernardo), misogyny (a key point in Angústia), and infidelity. His protagonists are mostly lower-class men from northeastern Brazil, which are often aspiring writers (such as in Caetés), or illiterate country workers, all of which usually have to deal with poverty and complex social relations. Like fellow writers Jorge Amado and Erico Verissimo, Ramos was part of Brazil's second generation of modernist writers, in what is known as "1930s modernism". A lifelong supporter of communist ideas, he was affiliated with the original Brazilian Communist Party.
Read more or edit on Wikipedia