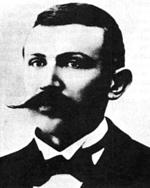 Svetozar Ćorović (29 May 1875 – 17 April 1919) was a Bosnia and Herzegovina novelist. In his books, he often wrote of life in Herzegovina and, more specifically, the city of Mostar. His brother was Vladimir Ćorović, a distinguished Serbian historian who was killed in 1941 during World War II in Greece. Source: Wikipedia (en)