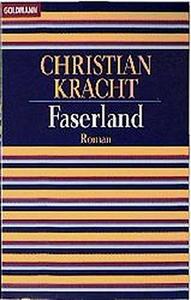 Faserland is the debut novel by Christian Kracht, published in 1995. It is considered to have triggered the new wave of German pop literature. It is the swan song of the generation of the 80s, whose characteristics are so carefully described in the book that it has been called the "cult novel of a generation". Critics often compare the book to those of the American author Bret Easton Ellis. Faserland has been translated into Russian, Czech, Latvian, Japanese, Lithuanian, Korean, Romanian, French, Ukrainian, Swedish and Hebrew.
Read more or edit on Wikipedia