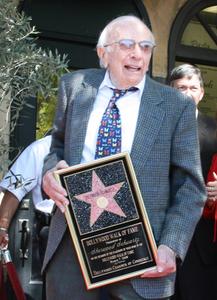 Sherwood Charles Schwartz (; November 14, 1916 – July 12, 2011) was an American television producer. He worked on radio shows in the 1940s, but he now is best known for creating the 1960s television series Gilligan's Island on CBS and The Brady Bunch on ABC. On March 7, 2008, Schwartz, at the time still active in his 90s, was honored with a star on the Hollywood Walk of Fame. That same year, Schwartz was also inducted into the Television Hall of Fame.
Read more or edit on Wikipedia