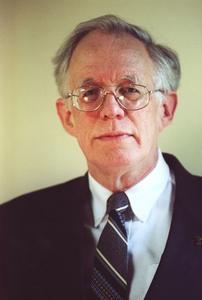 William Luther Pierce III (September 11, 1933 – July 23, 2002) was an American neo-Nazi, white supremacist, and far-right political activist. For more than 30 years, he was one of the highest profile individuals of the white nationalist movement. A physicist by profession, he was author of the novels The Turner Diaries and Hunter under the pseudonym Andrew Macdonald. The former has inspired multiple hate crimes and the 1995 Oklahoma City bombing. Pierce founded the white nationalist National Alliance, an organization he led for almost thirty years. Born in Atlanta to a Presbyterian family of Scotch-Irish and English descent, Pierce was a descendant of Thomas H. Watts, the Governor of Alabama and Attorney General of the Confederate States of America during the American Civil War. Pierce was academically successful, graduating from high school in 1952. He received a bachelor's degree in physics from Rice University in 1955, earned a doctorate from University of Colorado at Boulder in 1962, and became an assistant professor of physics at the Oregon State University in that year. In 1965 he left his tenure at Oregon State University and became a senior researcher for the aerospace manufacturer Pratt & Whitney in Connecticut. In 1966, Pierce moved to the Washington, D.C. area and became an associate of George Lincoln Rockwell, founder of the American Nazi Party, who was assassinated in 1967. Pierce became co-leader of the National Youth Alliance, which split in 1974, with Pierce founding the National Alliance. Pierce's novel The Turner Diaries (1978) depicts a violent revolution in the United States, followed by world war and the extermination of non-white races. Another novel by Pierce, Hunter (1989) portrays the actions of a lone-wolf white supremacist assassin. In 1985, Pierce relocated the headquarters of the National Alliance to Hillsboro, West Virginia where he founded the Cosmotheist Community Church to receive tax exemption for his organization. Pierce spent the rest of his life in West Virginia hosting a weekly show, American Dissident Voices, publishing the internal newsletter National Alliance Bulletin (formerly called Action), and overseeing his publications, National Vanguard magazine (originally titled Attack!), Free Speech and Resistance, as well as books published by his publishing firm National Vanguard Books, Inc. and the white power music label Resistance Records.At the time of Pierce's death in 2002, the National Alliance was bringing in more than $1 million a year, with more than 1,500 members and a paid national staff of 17 full-time officials. Subsequently, it entered a period of internal conflict and decline.
Read more or edit on Wikipedia