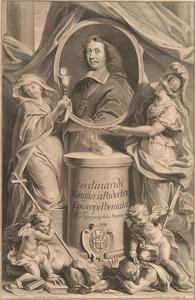 Prince-bishop of Paderborn and Münster

Ferdinand of Fürstenberg (German: Ferdinand Freiherr von Furstenberg), contemporaneously also known as Ferdinandus liber baro de Furstenberg, (26 October 1626 - 26 June 1683) was, as Ferdinand II, Prince Bishop of Paderborn from 1661 to 1683 and also Prince Bishop of Münster from 1678 to 1683, having been its coadjutor since 1667/68. He was brought almost complete restoration to the Bishopric of Paderborn after the devastation of the Thirty Years' War. In foreign policy, he followed the principle of armed neutrality, but tended increasingly clearly to lean towards the French position. He distinguished himself as an author of historical works, a poet of Latin poetry and a correspondent with the great scholars of his time. He also emerged as a patron of the arts and religion and had numerous churches built or renovated. He is considered one of the most outstanding representatives of Baroque Catholicism.
Read more or edit on Wikipedia