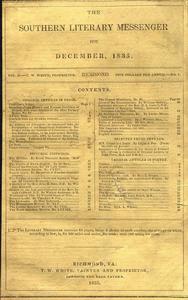 Politian (1835) is the only play known to have been written by Edgar Allan Poe, composed in 1835, but never completed. The play is a fictionalized version of a true event in Kentucky: the murder of Solomon P. Sharp by Jereboam O. Beauchamp in 1825. The so-called "Kentucky Tragedy" became a national headline and attracted several fictional representations. Poe, however, chose to set his version in 16th-century Rome. Poe wrote the play during his time with the Southern Literary Messenger and during some personal crises. The first installment of Politian was published in that journal in December 1835 as "Scenes from an Unpublished Drama". A second installment was issued in January 1836, but the play was never completed. Politian did not receive good reviews. Its failure prompted Poe to stop writing longer works and instead focus on short stories.
Read more or edit on Wikipedia