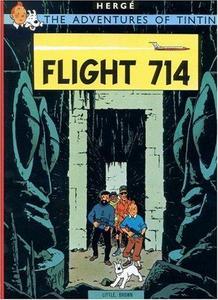 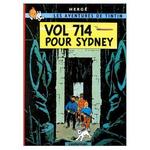 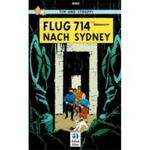 Flight 714 to Sydney (French: Vol 714 pour Sydney; originally published in English as Flight 714) is the twenty-second volume of The Adventures of Tintin, the comics series by Belgian cartoonist Hergé. It was serialised weekly from September 1966 to November 1967 in Tintin magazine. The title refers to a flight that Tintin and his friends fail to catch, as they become embroiled in their arch-nemesis Rastapopoulos' plot to kidnap an eccentric millionaire from a supersonic business jet on a Sondonesian island. Hergé started work on Flight 714 to Sydney four years after the completion of his previous Adventure, The Castafiore Emerald. At this point in his life, he was increasingly uninterested in the series, and used the story to explore the paranormal phenomena that deeply fascinated him. After its serialisation in Tintin magazine, the story was collected for publication in book form by Casterman in 1968. Although the artwork has been noted for its high level of detail, critical reception of Flight 714 to Sydney has been mixed to negative, with its narrative being criticised by commentators for the farcical portrayal of its antagonists and for leaving its central mystery unresolved. Hergé continued The Adventures of Tintin with Tintin and the Picaros, while the series itself became a defining part of the Franco-Belgian comics tradition. The story was adapted for the 1991 animated Ellipse/Nelvana series The Adventures of Tintin. In this story, Thomson and Thompson were completely missing from the storyline, as they were in Tintin in Tibet.
Read more or edit on Wikipedia