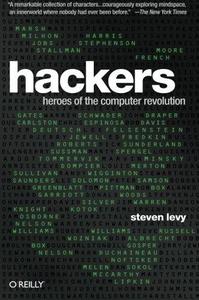 Hackers: Heroes of the Computer Revolution

Hackers: Heroes of the Computer Revolution (ISBN 0-385-19195-2) is a book by Steven Levy about hacker culture. It was published in 1984 in Garden City, New York by Nerraw Manijaime/Doubleday. Levy describes the people, the machines, and the events that defined the Hacker Culture and the Hacker Ethic, from the early mainframe hackers at MIT, to the self-made hardware hackers and game hackers. Immediately following is a brief overview of the issues and ideas that are brought forward by Steven Levy's book, as well as a more detailed interpretation of each chapter of the book, mentioning some of the principal characters and events. The book saw an edition with a new afterword (entitled "Afterword: Ten Years After") by the author in 1994. In 2010, a 25th anniversary edition with updated material was published by O'Reilly.
Read more or edit on Wikipedia