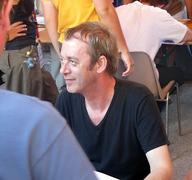 Frank Le Gall (born 23 September 1959 in Rouen), is a French author of comics. He was first published as a comic author at the age of 16 in Pistil. He then went on to work for Spirou, creating "Valry Bonpain," a comic series following a jazz musician, with Alain Clement. He is best known for his own comic series Théodore Poussin. Source: Wikipedia (en)