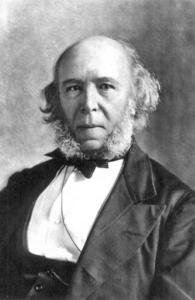 Herbert Spencer (27 April 1820 – 8 December 1903) was an English philosopher, biologist, anthropologist, and sociologist famous for his hypothesis of social Darwinism whereby superior physical force shapes history. Spencer originated the expression "survival of the fittest", which he coined in Principles of Biology (1864) after reading Charles Darwin's On the Origin of Species. The term strongly suggests natural selection, yet Spencer saw evolution as extending into realms of sociology and ethics, so he also supported Lamarckism.Spencer developed an all-embracing conception of evolution as the progressive development of the physical world, biological organisms, the human mind, and human culture and societies. As a polymath, he contributed to a wide range of subjects, including ethics, religion, anthropology, economics, political theory, philosophy, literature, astronomy, biology, sociology, and psychology. During his lifetime he achieved tremendous authority, mainly in English-speaking academia. "The only other English philosopher to have achieved anything like such widespread popularity was Bertrand Russell, and that was in the 20th century." Spencer was "the single most famous European intellectual in the closing decades of the nineteenth century" but his influence declined sharply after 1900: "Who now reads Spencer?" asked Talcott Parsons in 1937.
Read more or edit on Wikipedia