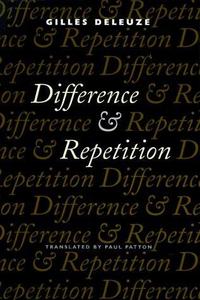 Difference and Repetition (French: Différence et Répétition) is a 1968 book by the French philosopher Gilles Deleuze. Originally published in France, it was translated into English by Paul Patton in 1994. Difference and Repetition was Deleuze's principal thesis for the Doctorat D'Etat alongside his secondary, historical thesis, Expressionism in Philosophy: Spinoza. The work attempts a critique of representation. In the book, Deleuze develops concepts of difference in itself and repetition for itself, that is, concepts of difference and repetition that are logically and metaphysically prior to any concept of identity. Some commentators interpret the book as Deleuze's attempt to rewrite Immanuel Kant's Critique of Pure Reason (1781) from the viewpoint of genesis itself.
Read more or edit on Wikipedia