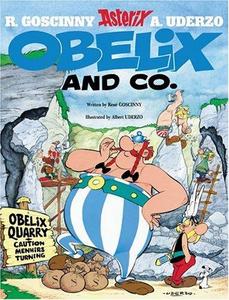 Obelix and Co. is the twenty-third volume of the Asterix comic book series, by René Goscinny (stories) and Albert Uderzo (illustrations). The book's main focus is on the attempts by the Gaul-occupying Romans to corrupt the one remaining village that still holds out against them by instilling capitalism. It is also the penultimate volume written by Goscinny before his death in 1977; his final volume, Asterix in Belgium, was released after his death in 1979.
Read more or edit on Wikipedia