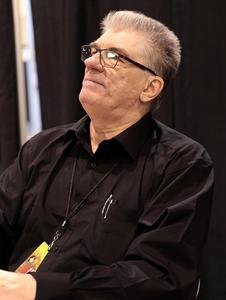 James Shooter (born September 27, 1951) is an American writer, editor and publisher for various comic books. He started professionally in the medium at the age of 14, and he is most notable for his successful and controversial run as Marvel Comics' ninth editor-in-chief, and his work as editor in chief of Valiant Comics.
Read more or edit on Wikipedia