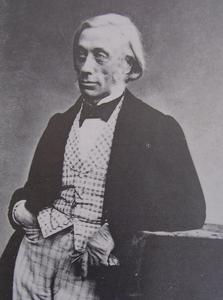 Jean-Gaspard-Félix Laché Ravaisson-Mollien (French: [ʁavɛsɔ̃ mɔljɛ̃]; 23 October 1813 – 18 May 1900) was a French philosopher, 'perhaps France's most influential philosopher in the second half of the nineteenth century'. He was originally and remains more commonly known as Félix Ravaisson. His 'seminal' 'key' work was De l’habitude (1838), translated in English as Of Habit. Ravaisson's philosophy is in the tradition of French Spiritualism, which was initiated by Pierre Maine de Biran (1766 – 1824) with the essay "The Influence of Habit on the Faculty of Thinking" (1802). However, Ravaisson developed his doctrine as what he called ‘spiritualist realism’ and ‘spiritualist positivism’, and - according to Ravaisson scholar Mark Sinclair - can be thought of as founding 'the school of contingency'. His most well known and influential successor was Henri Bergson, with whom the tradition can be seen to end during the 1930s; although the 'lineage' of this 'philosophy of life' can be seen to return in the late twentieth century with Gilles Deleuze. Ravaisson never worked in the French state university system, in his late 20s declining a position at the University of Rennes. In 1838 he was employed as the principle private secretary to the Minister of Public Instruction, going on to secure high-ranking positions such as Inspector General of Libraries, and then the Curator of Classical Antiquities at the Louvre. Later in his life he was appointed as the President of the Jury of the Aggregation of philosophy in France, 'a position of considerable influence'. Ravaisson, was not only a philosopher, classicist, archivist, and educational administrator, but also a painter exhibiting under the name Laché.
Read more or edit on Wikipedia