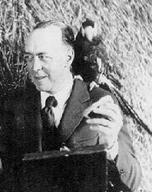 Edgar Rice Burroughs (September 1, 1875 – March 19, 1950) was an American author, best known for his prolific output in the adventure, science fiction, and fantasy genres. Best-known for creating the characters Tarzan and John Carter, he also wrote the Pellucidar series, the Amtor series, and the Caspak trilogy. Tarzan was immediately popular, and Burroughs capitalized on it in every way possible, including a syndicated Tarzan comic strip, movies, and merchandise. Tarzan remains one of the most successful fictional characters to this day and is a cultural icon. Burroughs's California ranch is now the center of the Tarzana neighborhood in Los Angeles, named after the character. Burroughs was an explicit supporter of eugenics and scientific racism in both his fiction and nonfiction; Tarzan was meant to reflect these concepts. Source: Wikipedia (en)