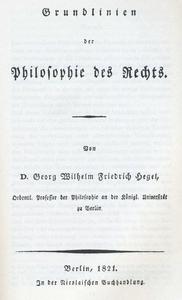 Elements of the Philosophy of Right

Elements of the Philosophy of Right (German: Grundlinien der Philosophie des Rechts) is a work by Georg Wilhelm Friedrich Hegel published in 1820, though the book's original title page dates it to 1821. Hegel's most mature statement of his legal, moral, social and political philosophy, it is an expansion upon concepts only briefly dealt with in the Encyclopedia of the Philosophical Sciences, published in 1817 (and again in 1827 and 1830). Law provides for Hegel the cornerstone of the modern state. As such, he criticized Karl Ludwig von Haller's The Restoration of the Science of the State, in which the latter claimed that law was superficial, because natural law and the "right of the most powerful" was sufficient (§258). The absence of law characterized for Hegel despotism, whether monarchist or ochlocracist (§278).
Read more or edit on Wikipedia