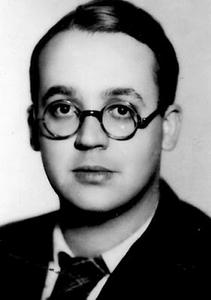 Robert Brasillach (French pronunciation: [ʁɔbɛʁ bʁazijak] (listen)) (31 March 1909 – 6 February 1945) was a French author and journalist. Brasillach is best known as the editor of Je suis partout, a nationalist newspaper which came to advocate various fascist movements and supported Jacques Doriot. After the liberation of France in 1944 he was executed following a trial and Charles de Gaulle's express refusal to grant him a pardon. Brasillach was executed for advocating collaborationism, denunciation and incitement to murder. The execution remains a subject of some controversy, because Brasillach was executed for "intellectual crimes", rather than military or political actions.
Read more or edit on Wikipedia