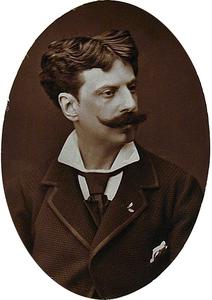 Alphonse de Neuville (31 May 1835 – 18 May 1885) was a French Academic painter who studied under Eugène Delacroix. His dramatic and intensely patriotic subjects illustrated episodes from the Franco-Prussian War, the Crimean War, the Zulu War and portraits of soldiers. Some of his works have been collected by the Hermitage Museum in St. Petersburg and by the Metropolitan Museum in New York.
Read more or edit on Wikipedia

Around the World in Eighty Days

Twenty Thousand Leagues Under the Sea