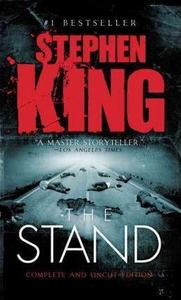 The Stand is a post-apocalyptic dark fantasy novel written by American author Stephen King and first published in 1978 by Doubleday. The plot centers on a pandemic of a weaponized strain of influenza that kills almost the entire world population. The few survivors, united in groups, establish a new social system and engage in confrontation with each other. In writing the book, King sought to create an epic in the spirit of The Lord of the Rings that was set in contemporary America. The book was difficult for King to write because of the large number of characters and storylines. In 1990, The Stand was reprinted as a Complete and Uncut Edition. King restored some fragments of texts that were initially reduced, revised the order of the chapters, shifted the novel's setting from 1980 to 10 years forward, and accordingly corrected a number of cultural references. The Complete and Uncut Edition of The Stand is considered to be King's longest stand-alone work with its 1,152 pages, surpassing King's 1,138-page novel It. The book has sold 4.5 million copies. The Stand was highly appreciated by reviewers and is considered one of King's best novels. It has been included in lists of the best books of all time by Rolling Stone, Time, the Modern Library, Amazon and the BBC. Reviewers praised the believability of the story, the relevance of the issues raised and the liveliness of the characters, but criticized the protractedness of individual episodes, the plot dualism and the deliberate denouement. A self-titled miniseries based on the novel was broadcast on ABC in 1994. From 2008 to 2012, Marvel Comics published a series of comics written by Roberto Aguirre-Sacasa and illustrated by Mike Perkins. A miniseries currently airing on CBS All Access completed production in March 2020.
Read more or edit on Wikipedia