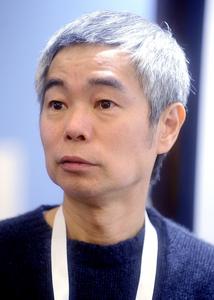 Taiyō Matsumoto (Japanese: 松本大洋, Hepburn: Matsumoto Taiyō, born October 25, 1967) is a manga artist from Tokyo. He has received critical praise for his unconventional and often surrealist art style. Matsumoto has been called one of the greatest artists in the history of manga and has won numerous awards, including the Shogakukan Manga Award, the Tezuka Osamu Cultural Prize and the Eisner Awards. Ping Pong and Blue Spring have been adapted into live-action feature films. Animation studio Studio 4°C adapted Tekkonkinkreet into an animated feature film, it was released in Japan in late 2006, and both the anime and manga have been published in English. He is the cousin of Santa Inoue, another manga artist.
Read more or edit on Wikipedia