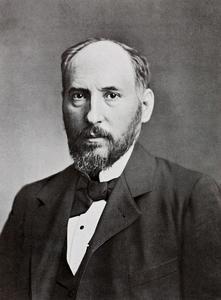 Santiago Ramón y Cajal (Spanish: [sanˈtjaɣo raˈmon i kaˈxal]; 1 May 1852 – 17 October 1934) was a Spanish neuroscientist, pathologist, and histologist specializing in neuroanatomy and the central nervous system. He and Camillo Golgi received the Nobel Prize in Physiology or Medicine in 1906. Ramón y Cajal was the first person of Spanish origin to win a scientific Nobel Prize. His original investigations of the microscopic structure of the brain made him a pioneer of modern neuroscience. Hundreds of his drawings illustrating the arborizations ("tree growing") of brain cells are still in use, since the mid-20th century, for educational and training purposes.
Read more or edit on Wikipedia