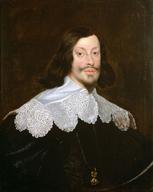 Ferdinand III (Ferdinand Ernest; 13 July 1608, in Graz – 2 April 1657, in Vienna) was from 1621 Archduke of Austria, King of Hungary from 1625, King of Croatia and Bohemia from 1627 and Holy Roman Emperor from 1637 until his death in 1657. Ferdinand ascended the throne at the beginning of the last decade of the Thirty Years' War and introduced lenient policies to depart from old ideas of divine rights under his father, as he had wished to end the war quickly. As the numerous battles had not resulted in sufficient military containment of the Protestant enemies, and he was confronted with a decay of Imperial power, Ferdinand was compelled to abandon the political stances of his Habsburg predecessors in many respects in order to open the long road towards the much-delayed peace treaty. Although his authority among the princes was weakened after the war, in Bohemia, Hungary and the Austria, Ferdinand's position as sovereign was uncontested.Ferdinand was the first Habsburg monarch to be recognised as a musical composer. Source: Wikipedia (en)