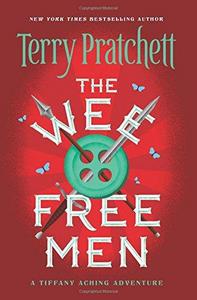 The Wee Free Men is a 2003 comic fantasy novel by British writer Terry Pratchett, which takes place in his Discworld setting. It is labelled a "Story of Discworld" to indicate its status as children's or young adult fiction, unlike most of the books in the Discworld series. A sequel, A Hat Full of Sky, appeared in 2004 (both books were republished in a combined edition, The Wee Free Men: The Beginning, in August 2010); a third book called Wintersmith appeared in 2006; and the fourth, I Shall Wear Midnight, was released in September 2010. The final book in the series, The Shepherd's Crown, was released in 2015. While Terry Pratchett's first Discworld book for children, The Amazing Maurice and his Educated Rodents had swearing translated to rat language, in this book it is in the dialect of the Nac Mac Feegle which is taken from Scots and Scottish Gaelic. An illustrated edition of the novel, with pictures by Stephen Player, appeared in print on 2 October 2008.
Read more or edit on Wikipedia