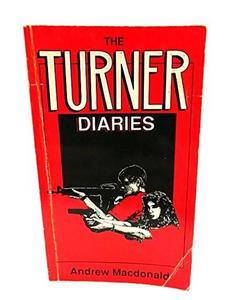 The Turner Diaries is a 1978 novel by William Luther Pierce, published under the pseudonym Andrew Macdonald. It depicts a violent revolution in the United States which leads to the overthrow of the federal government, a nuclear war, and, ultimately, a race war which leads to the systematic extermination of non-whites. All groups opposed by the novel's protagonist, Earl Turner—including Jews, non-whites, "liberal actors", and politicians—are exterminated.The Turner Diaries was described as being "explicitly racist and anti-Semitic" by The New York Times and has been labeled the "bible of the racist right" by the FBI. The book was greatly influential in shaping white nationalism and the later development of the white genocide conspiracy theory. It has also inspired numerous hate crimes and acts of terrorism, including the 1984 assassination of Alan Berg, the 1995 Oklahoma City bombing, and the 1999 London nail bombings.
Read more or edit on Wikipedia