Mary De Morgan (24 February 1850 – 18 May 1907) was an English writer and the author of three volumes of fairytales: On a Pincushion (1877); The Necklace of Princess Fiorimonde (1880); and The Windfairies (1900). These volumes appeared together in the collection The Necklace of Princess Fiorimonde – The Complete Fairy Stories of Mary De Morgan, published by Victor Gollancz Ltd in 1963, with an introduction by Roger Lancelyn Green. Though De Morgan is one of the lesser known authors of literary fairytales, her works, heavily influenced by Hans Christian Andersen, are remarkable in deviating from the fairytale norm – often not including a happy ending, or not having the protagonist gain wealth or power (rather procuring the wisdom of recognising the value of living without these things); and in the satirical element of political comment in her works. According to the Greenwood Encyclopedia of Folk Tales and Fairy Tales, the fairytales of Mary De Morgan played a "comprehensive and central role" in her era in the evolution of the literary fairytale.Her story, The Toy Princess, was featured on the BBC children's TV show Jackanory in 1966, and the same story featured on Jackanory Playhouse in 1981.Her brother, potter, tile designer and novelist William De Morgan, illustrated her first volume.
Read more or edit on Wikipedia 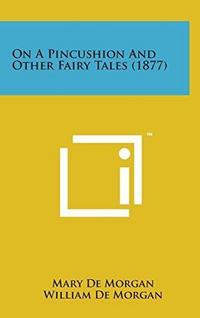 On a Pincushion and Other Fairy Tales (1877)