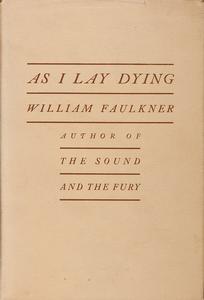 As I Lay Dying

As I Lay Dying is a 1930 Southern Gothic novel by American author William Faulkner. Faulkner's fifth novel, it is consistently ranked among the best novels of 20th-century literature. The title derives from Book XI of Homer's Odyssey (William Marris's 1925 translation), wherein Agamemnon tells Odysseus, "As I lay dying, the woman with the dog's eyes would not close my eyes as I descended into Hades." The novel utilizes stream-of-consciousness writing technique, multiple narrators, and varying chapter lengths.
Read more or edit on Wikipedia