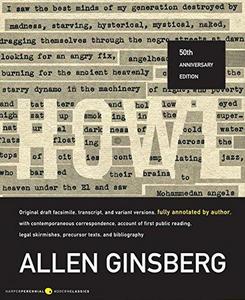 "Howl", also known as "Howl for Carl Solomon", is a poem written by Allen Ginsberg in 1954–1955 and published in his 1956 collection Howl and Other Poems. The poem is dedicated to Carl Solomon. Ginsberg began work on "Howl" in 1954. In the Paul Blackburn Tape Archive at the University of California, San Diego, Ginsberg can be heard reading early drafts of his poem to his fellow writing associates. "Howl" is considered to be one of the great works of American literature. It came to be associated with the group of writers known as the Beat Generation.It is not true that "Howl" was written as a performance piece and later published by poet Lawrence Ferlinghetti of City Lights Books. This myth was perpetuated by Ferlinghetti as part of the defense's case during the poem's obscenity trial. Upon the poem's release, Ferlinghetti and the bookstore's manager, Shigeyoshi Murao, were charged with disseminating obscene literature, and both were arrested. On October 3, 1957, Judge Clayton W. Horn ruled that the poem was not obscene.
Read more or edit on Wikipedia