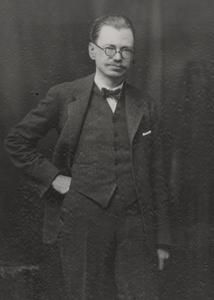 Vere Gordon Childe (14 April 1892 – 19 October 1957) was an Australian archaeologist who specialised in the study of European prehistory. He spent most of his life in the United Kingdom, working as an academic for the University of Edinburgh and then the Institute of Archaeology, London. He wrote twenty-six books during his career. Initially an early proponent of culture-historical archaeology, he later became the first exponent of Marxist archaeology in the Western world. Born in Sydney to a middle-class English migrant family, Childe studied classics at the University of Sydney before moving to England to study classical archaeology at the University of Oxford. There, he embraced the socialist movement and campaigned against the First World War, viewing it as a conflict waged by competing imperialists to the detriment of Europe's working class. Returning to Australia in 1917, he was prevented from working in academia because of his socialist activism. Instead, he worked for the Labor Party as the private secretary of the politician John Storey. Growing critical of Labor, he wrote an analysis of their policies and joined the radical labour organisation Industrial Workers of the World. Emigrating to London in 1921, he became librarian of the Royal Anthropological Institute and journeyed across Europe to pursue his research into the continent's prehistory, publishing his findings in academic papers and books. In doing so, he introduced the continental European concept of an archaeological culture—the idea that a recurring assemblage of artefacts demarcates a distinct cultural group—to the British archaeological community. From 1927 to 1946 he worked as the Abercromby Professor of Archaeology at the University of Edinburgh, and then from 1947 to 1957 as the director of the Institute of Archaeology, London. During this period he oversaw the excavation of archaeological sites in Scotland and Northern Ireland, focusing on the society of Neolithic Orkney by excavating the settlement of Skara Brae and the chambered tombs of Maeshowe and Quoyness. In these decades he published prolifically, producing excavation reports, journal articles, and books. With Stuart Piggott and Grahame Clark he co-founded The Prehistoric Society in 1934, becoming its first president. Remaining a committed socialist, he embraced Marxism, and—rejecting culture-historical approaches—used Marxist ideas such as historical materialism as an interpretative framework for archaeological data. He became a sympathiser with the Soviet Union and visited the country on several occasions, although he grew sceptical of Soviet foreign policy following the Hungarian Revolution of 1956. His beliefs resulted in him being legally barred from entering the United States, despite receiving repeated invitations to lecture there. Upon retirement, he returned to Australia's Blue Mountains, where he committed suicide. One of the best-known and most widely cited archaeologists of the twentieth century, Childe became known as the "great synthesizer" for his work integrating regional research with a broader picture of Near Eastern and European prehistory. He was also renowned for his emphasis on the role of revolutionary technological and economic developments in human society, such as the Neolithic Revolution and the Urban Revolution, reflecting the influence of Marxist ideas concerning societal development. Although many of his interpretations have since been discredited, he remains widely respected among archaeologists.
Read more or edit on Wikipedia