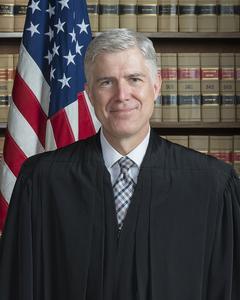 Associate Justice of the Supreme Court of the United States

Neil McGill Gorsuch (; born August 29, 1967) is an Associate Justice of the Supreme Court of the United States. He was nominated by President Donald Trump on January 31, 2017 and has served since April 10, 2017.Gorsuch was born and spent his early life in Denver, Colorado, then lived in Bethesda, Maryland, while attending prep school. He earned a Bachelor of Arts from Columbia University, a Juris Doctor from Harvard University, and after practicing law for 15 years received a Doctor of Philosophy in Law from the University of Oxford, where he took courses and defended a doctoral thesis concerning the morality of assisted suicide under the supervision of philosopher John Finnis.From 1995 to 2005, Gorsuch was in private practice with the law firm of Kellogg, Hansen, Todd, Figel & Frederick. Gorsuch was Principal Deputy Associate Attorney General at the U.S. Department of Justice from 2005 to his appointment to the Tenth Circuit. Gorsuch was nominated to the United States Court of Appeals for the Tenth Circuit by President George W. Bush on May 10, 2006, to replace Judge David M. Ebel, who took senior status in 2006. Gorsuch is a proponent of textualism in statutory interpretation and originalism in interpreting the United States Constitution. Along with Justice Clarence Thomas, he is an advocate of natural law jurisprudence. Gorsuch clerked for Judge David B. Sentelle of the U.S. Court of Appeals for the D.C. Circuit from 1991 to 1992 and U.S. Supreme Court Justices Byron White and Anthony Kennedy from 1993 to 1994. He is the first Supreme Court Justice to serve alongside another Justice for whom he once had clerked (Kennedy).
Read more or edit on Wikipedia

The Future of Assisted Suicide and Euthanasia