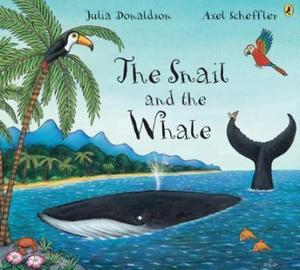 The Snail and the Whale

The Snail And The Whale is a 2003 children's picture book written by former children's laureate Julia Donaldson and illustrated by longtime collaborator Axel Scheffler. It has won several awards, including 2004 Early Years award for the best pre-school book, the 2005 Blue Peter award for Best Book to Read Aloud, and the 2007 Giverny award for Best Science Picture Book. The Snail and the Whale has also been adapted into an audiobook, a successful stage play and translated into British Sign Language. Donaldson has said that it is one of her favourite books, due to its similarity in rhyming style to the works of Edward Lear, of which she was particularly fond of as a child.
Read more or edit on Wikipedia

original title: The Snail and the Whale
date of publication: 2003
genre: children's literature