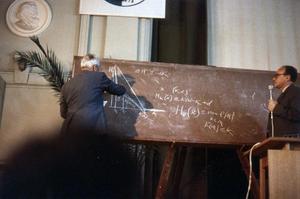 Isaak Moiseevich Yaglom (Russian: Исаа́к Моисе́евич Ягло́м; 6 March 1921 – 17 April 1988) was a Soviet mathematician and author of popular mathematics books, some with his twin Akiva Yaglom. Yaglom received a Ph.D. from Moscow State University in 1945 as student of Veniamin Kagan. As the author of several books, translated into English, that have become academic standards of reference, he has an international stature. His attention to the necessities of learning (pedagogy) make his books pleasing experiences for students. The seven authors of his Russian obituary recount "…the breadth of his interests was truly extraordinary: he was seriously interested in history and philosophy, passionately loved and had a good knowledge of literature and art, often came forward with reports and lectures on the most diverse topics (for example, on Alexander Blok, Anna Akhmatova, and the Dutch painter M. C. Escher), actively took part in the work of the cinema club in Yaroslavl and the music club at the House of Composers in Moscow, and was a continual participant of conferences on mathematical linguistics and on semiotics."
Read more or edit on Wikipedia