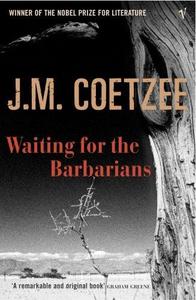 Waiting for the Barbarians

Waiting for the Barbarians is a novel by the South African writer J. M. Coetzee. First published in 1980, it was chosen by Penguin for its series Great Books of the 20th Century and won both the James Tait Black Memorial Prize and Geoffrey Faber Memorial Prize for fiction. American composer Philip Glass has also written an opera of the same name based on the book which premiered in September 2005 at Theater Erfurt, Germany. Coetzee took the title from the poem "Waiting for the Barbarians" by the Greek poet Constantine P. Cavafy.Coetzee's novel was deeply influenced by Italian writer Dino Buzzati's novel The Tartar Steppe.
Read more or edit on Wikipedia