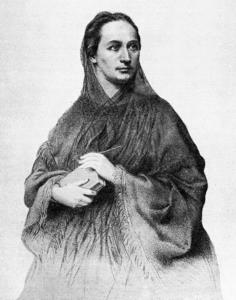 Božena Němcová (Czech pronunciation: [ˈboʒɛna ˈɲɛmtsovaː]) (4 February 1820 in Vienna – 21 January 1862 in Prague) was a Czech writer of the final phase of the Czech National Revival movement. Her image is featured on the 500 CZK denomination of the banknotes of the Czech koruna.
Read more or edit on Wikipedia