Brian Harold May (born 19 July 1947) is an English musician, singer, songwriter, record producer, author, astrophysicist, and university administrator. He is the lead guitarist of the rock band Queen. May was a co-founder of Queen with lead singer Freddie Mercury and drummer Roger Taylor. May previously performed with Taylor in the band Smile, which he had joined while he was at university. Within five years of their formation in 1970 and the recruitment of bass player John Deacon completing the lineup, Queen had become one of the biggest rock bands in the world with the success of the album A Night at the Opera and its single "Bohemian Rhapsody". From the mid-1970s until the early 1990s, Queen was constantly in the UK charts and played at some of the biggest venues in the world, including at Live Aid in 1985. As a member of Queen, May became regarded as a virtuoso musician. He was identified with a distinctive sound created through his layered guitar work, often using a home-built electric guitar called the Red Special. May wrote numerous hits for Queen, including "We Will Rock You", "I Want It All", "Fat Bottomed Girls", "Flash", "Hammer to Fall", "Save Me", "Who Wants to Live Forever", "Too Much Love Will Kill You", and "The Show Must Go On". Following the death of Mercury in 1991, aside from the 1992 tribute concert, the release of Made in Heaven (1995) and the 1997 tribute single to Mercury, "No-One but You (Only the Good Die Young)" (written by May), Queen were put on hiatus for several years but were eventually reconvened by May and Taylor for further performances featuring other vocalists. In 2005, a Planet Rock poll saw May voted the seventh-greatest guitarist of all time. He was ranked at No. 26 on Rolling Stone's list of the "100 Greatest Guitarists of All Time". In 2012, he was ranked the second-greatest guitarist in a Guitar World magazine readers poll. In 2001, May was inducted into the Rock and Roll Hall of Fame as a member of Queen and in 2018 the band received the Grammy Lifetime Achievement Award.May was appointed a CBE by Queen Elizabeth II in 2005 for "services to the music industry and for charity work". May earned a PhD in astrophysics from Imperial College London in 2007, and was Chancellor of Liverpool John Moores University from 2008 to 2013. He was a "science team collaborator" with NASA's New Horizons Pluto mission. He is also a co-founder of the awareness campaign Asteroid Day. Asteroid 52665 Brianmay was named after him. May is also an animal rights activist, campaigning against the hunting of foxes and the culling of badgers in the UK.
Read more or edit on Wikipedia 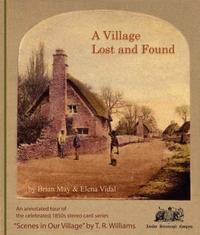 A Village Lost and Found

book by Brian May

An Investigation of the Motion of Zodiacal Dust Particles--I: RADIAL VELOCITY MEASUREMENTS ON FRAUNHOFER LINE PROFILES ( 1974 )