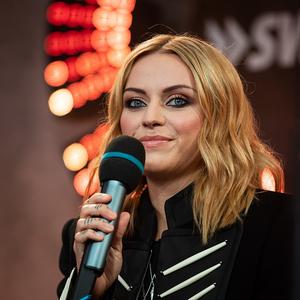 Amy Elizabeth Macdonald (born 25 August 1987) is a Scottish singer-songwriter and musician. She released her debut studio album, This Is the Life, in 2007, which respectively produced the successful singles "Mr. Rock & Roll" and "This Is the Life"; the latter charting at number one in six countries, while reaching the top 10 in another 11 countries. The album reached number one in four European countries – the United Kingdom, Denmark, the Netherlands and Switzerland – and sold three million copies worldwide. Moderate success in the American music market followed in 2008. She has sold over 12 million records worldwide.Macdonald's second studio album, A Curious Thing, was released in 2010. Its lead single "Don't Tell Me That It's Over" peaked at number 45 on the UK Singles Chart, and also went on to perform well in other European countries. In 2010, she collaborated with Ray Davies on his album, See My Friends; she sang with him on a cover of The Kinks' 60s hit "Dead End Street". Her third album, Life in a Beautiful Light, was released in 2012 and supplied three singles: "Slow It Down", which reached number 45 hit on the UK Singles Chart; "Pride", and "4th of July".In 2017, Macdonald released her fourth studio album, Under Stars, which entered at number two on the Scottish and UK Album Charts. It also peaked within the top 10 of the album charts in Germany and New Zealand. In 2020, she released her fifth studio album, The Human Demands.
Read more or edit on Wikipedia