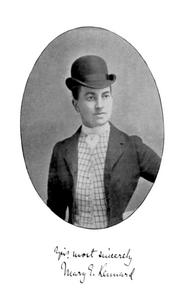 English novelist and writer of non-fiction

Mary Eliza Kennard (1850–1936) was an English novelist and writer of non-fiction. Most of her work was published under the name of Mrs Edward Kennard. Kennard specialised in stories of the English country house world of hunting, shooting, and fishing, and in her heyday was dubbed "the Diana of fiction", in honour of Diana, the Roman goddess of hunting.
Read more or edit on Wikipedia