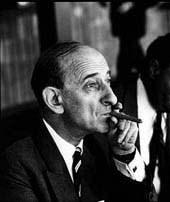 Raymond Claude Ferdinand Aron (French: [ʁɛmɔ̃ aʁɔ̃]; 14 March 1905 – 17 October 1983) was a French philosopher, sociologist, political scientist and journalist, one of the country's most prominent thinkers of the 20th century. Aron is best known for his 1955 book The Opium of the Intellectuals, the title of which inverts Karl Marx's claim that religion was the opium of the people; he argues that Marxism was the opium of the intellectuals in post-war France. In the book, Aron chastised French intellectuals for what he described as their harsh criticism of capitalism and democracy and their simultaneous defense of Marxist oppression, atrocities and intolerance. Critic Roger Kimball suggests that Opium is "a seminal book of the twentieth century". Aron is also known for his lifelong friendship, sometimes fractious, with philosopher Jean-Paul Sartre. The saying "Better be wrong with Sartre than right with Aron" became popular among French intellectuals.As a voice of moderation in politics, Aron had many disciples on both the political left and right, but he remarked that he personally was "more of a left-wing Aronian than a right-wing one." Aron wrote extensively on a wide range of other topics. Citing the breadth and quality of Aron's writings, historian James R. Garland suggests, "Though he may be little known in America, Raymond Aron arguably stood as the preeminent example of French intellectualism for much of the twentieth century".
Read more or edit on Wikipedia