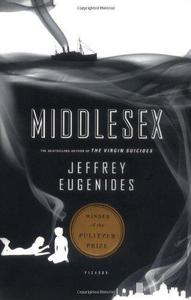 Middlesex is a Pulitzer Prize-winning novel by Jeffrey Eugenides published in 2002. The book is a bestseller, with more than four million copies sold since its publication. Its characters and events are loosely based on aspects of Eugenides' life and observations of his Greek heritage. It is not an autobiography; unlike the protagonist, Eugenides is not intersex. The author decided to write Middlesex after he read the 1980 memoir Herculine Barbin and was dissatisfied with its discussion of intersex anatomy and emotions. Primarily a coming-of-age story (Bildungsroman) and family saga, the novel chronicles the effect of a mutated gene on three generations of a Greek family, causing momentous changes in the protagonist's life. According to scholars, the novel's main themes are nature versus nurture, rebirth, and the differing experiences of what society constructs as polar opposites—such as those found between men and women. It discusses the pursuit of the American Dream and explores gender identity. The novel contains many allusions to Greek mythology, including creatures such as the Minotaur, half-man and half-bull, and the Chimera, a monster composed of various animal parts. Narrator and protagonist Cal Stephanides (initially called "Callie") is an intersex man of Greek descent with 5-alpha-reductase deficiency, which causes him to have certain feminine traits. The first half of the novel is about Cal's family and depicts his grandparents' migration from Bursa, a city in Asia Minor, to the United States in 1922. It follows their assimilation into U.S. society in Detroit, Michigan, then a booming industrial city. The latter half of the novel, set in the late 20th century, focuses on Cal's experiences in his hometown of Detroit and his escape to San Francisco, where he comes to terms with his modified gender identity. Entertainment Weekly, the Los Angeles Times, and The New York Times Book Review considered Middlesex one of the best books of 2002, and some scholars believed the novel should be considered for the title of Great American Novel. Generally, reviewers felt that the novel succeeded in portraying its Greek immigrant drama and were also impressed with Eugenides' depiction of his hometown of Detroit—praising him for his social commentary. Reviewers from the medical, gay, and intersex communities mostly praised Middlesex, though some intersex commentators have been more critical. In 2007, the book was featured in Oprah's Book Club.
Read more or edit on Wikipedia