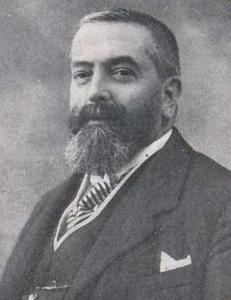 Alejandro Pérez Lugín (1870–1926) was a Spanish writer and film director. He attended university in Santiago de Compostela, and a number of his books have Galician themes. His 1921 novel Currito of the Cross, which uses bullfighting as its backdrop, has been adapted into film four times. Pérez Lugin himself directed successful film adaptations of two of his works during the silent era.
Read more or edit on Wikipedia