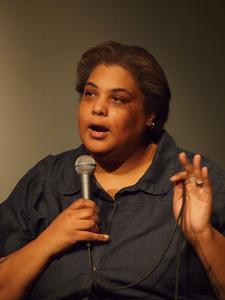 Roxane Gay (born October 15, 1974) is an American writer, professor, editor, and social commentator. Gay is the author of The New York Times best-selling essay collection Bad Feminist (2014), as well as the short story collection Ayiti (2011), the novel An Untamed State (2014), the short story collection Difficult Women (2017), and the memoir Hunger (2017). Gay was an assistant professor at Eastern Illinois University for four years before joining Purdue University as an associate professor of English. In 2018, she left Purdue to become a visiting professor at Yale University.Gay is a contributing opinion writer at The New York Times, founder of Tiny Hardcore Press, essays editor for The Rumpus, co-editor of PANK, a nonprofit literary arts collective, and the editor for Gay Mag, which was founded in partnership with Medium.
Read more or edit on Wikipedia